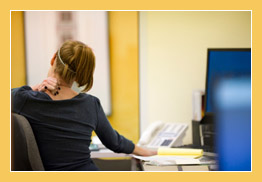 When Sukie B. came into my Neuromuscular Therapy center near her hometown southwest of Boston, her neck pain was chronic and so bad that any kind of exercise hurt. Sometimes it made her nauseous. Even walking with her arms swinging could cause a flare-up. It was becoming a real problem at work.

She had taken a bad fall in 1978 when she had injured her back and one hip, but there was no initiating event when her neck pains started in the 80’s. Consulting a doctor about it, she was told she had a herniated disc at C4-5. A few years later she developed chronic fatigue and mild fibromialgia. Those conditions had gotten much better, but she still had trouble sleeping.

Presently, she is aware that her work is contributing. She is on the phone a lot as a customer service representative and can’t use a headset. She has to listen on her left side so she can write with her right hand. She also finds that she will be awakened by pain and numbness sleeping on that side. She takes medications when needed but was at the end of her rope with the pain when someone told her about Neuromuscular Therapy.

As a Neuromuscular Therapist what factors do I have to consider when presented with neck pain? The next post talks about what I thought about in Sukie’s case.