This is part of a series on the causes of arm and hand pain. To see the general list, go back to the checklist of causes.

The supinator and both pronator muscles are located right in the forearm. They cause pain locally and down into the wrist and thumb. The brachioradialis is a longer muscle but has a referred pain pattern similar to the supinator and a similar function. 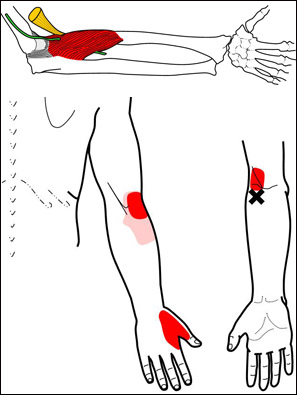 The supinator muscle (in red to the left here) is known mostly for causing “tennis elbow” and lateral epicondylitis, or pain in the outer part of the elbow. It nestles deep around the bones of the joint, wrapping around the radius bone of the forearm on the thumb side, attaching below to the ulna bone near your elbow. It’s job is to turn your arm so your palm faces upward. Local pain can be felt both with movement and at rest. Referred pain from Trigger Points is felt in the elbow, but also down into the base of the thumb and the back side of the web between the thumb and index finger.

The brachioradialis attaches between the upper arm bone (humerus) and the head of the radius bone at the thumb side of the wrist. The reason I include it here is that it causes pain in the outside of the elbow like epicondylitis and performs the same motion of twisting the arm as the supinator, like opening doors with a doorknob. Referred pain also goes down into the base of the thumb and the back of the web between the thumb and index finger.

The pronator teres turns the palm downward, opposite to the supinator, and attaches between the inner elbow and the middle of the radius bone of the forearm. The pain it causes from Trigger Points is in the inner fleshy part of the forearm and down into the wrist and base of the thumb. The pronator quadratus spans the space between the ulna and radius at the wrist and has the same action as the pronator teres. It occupies a similar position to the carpal ligament that forms the top of the carpal tunnel. It’s Trigger Points are not recorded, but local pain would be at the wrist, more toward the base of the thumb.