This is a series on arm and hand pain. If you missed the beginning, go back to the “Checklist of Causes.” In my Neuromuscular Therapy center near Boston, I treat arm and hand pain caused by texting and computer use.

The opponens muscles of the little finger and thumb are on the outsides of the hand and do the cupping motion you use to hold a computer mouse or a hand-held texting device like a Blackberry. (See the previous post for the opponens digiti minimi.) 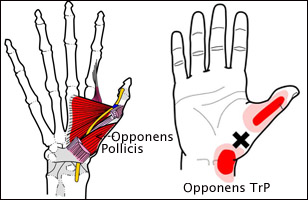 Above you see the opponens muscle of the thumb (opponens pollicis) and it’s Trigger Point pattern. Pain from the TrP refers into the palm side of the wrist and up into the thumb itself.  The literature doesn’t show specific TrPs for the little finger, but it is safe to assume it has the same pattern as that of the thumb, into the finger and down into the palm side of the wrist. The resulting inner wrist pain can be misdiagnosed as Carpal Tunnel Syndrome. 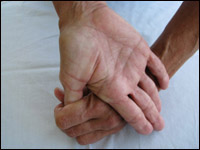 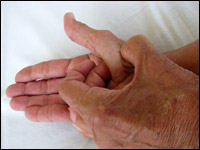 Self-treatment involves compressing the pad of the thenar eminence between the fingers of the opposite hand and/or pressing the muscle against the bone for 8-12 seconds until a release is felt, then stretching the thumb back and away from the palm. The thenar treatment is shown here on the left. and the stretch on the right.

The hypothenar eminence of the pinkie finger can be treated using the same compression procedure.