As a Neuromuscular Therapist, how do I think about knee pain?

Pressure on a joint causes pain. Tight muscles increase pressure, so releasing muscle tension decreases pressure and helps to relieve pain. If irritation and inflammation have developed caused by friction in the joint caused by the bones of the joint rubbing together, the pain will be more significant and the inflamed tissue will take longer to heal.

Muscles and Ligaments: The knee has muscles and ligaments that move and support it on all sides. Any of those can be individual contributors to knee pain, but together they tighten up the joint to stabilize it during movement. To relieve the pressure, the muscles need to be looser to allow space for movement without friction.

The “quads” are the first muscles I treat with any knee pain (quadriceps femoris, from the Latin meaning four heads attaching to the femur). The quads are the muscles in the front of the thigh. They straighten the knee and attach to the tendon that surrounds and encloses the kneecap (patella). When the muscles are tight they can press the patella against the knee joint, causing pain with movement. More importantly to an NMT, they all have Trigger Points into and around the knee. The quads together are a large and powerful group of muscles that need to be thoroughly examined top to bottom to find and treat these points that cause knee pain. 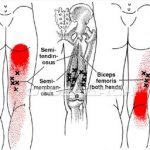 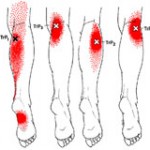 The third muscle I treat is in the “gastroc” in the calf. The gastrocnemius is the muscle you see bulging as a pair in the mid-calf when someone stands on their toes. It attaches behind the knee to the thighbone (femur). One of its jobs is to stabilize the knee. Three of its Trigger Points refer to the back of the knee.

The last muscles needing attention are the popliteus and plantaris, two little ones just behind and below the knee . Both can cause knee pain because of their locations and their Trigger Point patterns. The popliteus can also cause instability in the knee, especially going down stairs.

The LCL (lateral colateral ligament) on the outside of the knee, joining the bones of the thigh and leg, is the one ligament with a Trigger Point to the knee. Other ligaments can be painful just from being injured or stressed.