As a Neuromuscular Therapist, how do I think about acute hip pain, particularly in the case of Addison G.. 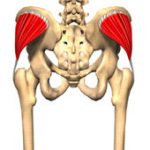 In acute pain cases, I have to determine quickly where the pain is originating. Since Addison was sure this was not a back problem or bursitis or joint disease, the most logical source was a gluteus medius Trigger Point which refers pain into the buttocks and up across the crest of the hip and into the waist.

Other muscles needed to be examined for their contributions. Trigger Point pain: The tensor fascia lata is a major source of pain referrred into the joint and down the side of the thigh. Trigger Points could be referring from local sources within the hip (gluteus minimus and maximus, piriformis) or from the quadriceps in the thigh or the quadratus lumborum in the low back. Local muscle and tendon pain: Dysfunction in any of the muscles that flex hip (TFL, sartorius, pectineus, rectus femoris, iliopsoas could be causing pain.

Local immobility and pain in the hip joint itself can also be joint dysfunction. When muscles that cross a joint and move it are holding it too tightly, the pressure can cause the nerves in the joint to fire, sending a warning that there is a problem. Tension can also lead to misalignment and malfunction in the joint with changes in gait pattern and movements at the hip. If the tension is left untreated, it can lead to an inflammatory condition like arthritis or bursitis and eventually to hip disease or hip replacement surgery.

In Addison’s case, I was also concerned about tension in the hip flexors because of his seated posture, bent at the hip for hours on end. When muscles are immobilized and shortened, blood flow slows down and nutrients and oxygen are not efficiently delivered to the muscles. Without oxygen, muscles spasm and pain follows. Treatment involves releasing the muscle tension with sustained pressure so blood can flow again, bringing healing cells to repair damage and removing pain-causing metabolic waste products produced by the hyperactivity of the muscle in spasm. Trigger Points in the gluteus medius were a key focus in treating Addison.